For those seeking a hipster haven in the Pacific Northwest, Portland, Oregon is always a top contender. You'll find Portland in the northwest part of Oregon, just south of Vancouver, in the Willamette Valley region, and roughly about a 90-minute drive from the Pacific Ocean. It’s easy to see why – with endless rainy days, lush greenery, and a unique assortment of residents, Portland is a city that marches to its own beat.

Their infamous mantra to “Keep Portland Weird” has left the city to do just that; various oddities and unique attractions make an episode of Portlandia seem not too far from reality. Various modes of public transportation are readily available to move you throughout the city, but nothing is more popular than bike riding among apartment dwellers. Extensive bike paths can be found everywhere, serving as a simplified way to move across the city while avoiding car traffic on the many iconic bridges that cross the Willamette River.

Portland has truly made a name for themselves with the multitude of street food trucks readily available at all hours of the day, though nothing can compete with the number of breweries throughout the city. Rightfully known as the craft beer capital of the world, Portland has more breweries in their city limits than anywhere else.

The Goose Hollow neighborhood, adjacent to Downtown Portland, was established in 1845 and has the distinction of being one of the city’s original neighborhoods. (Yes, geese were once raised there!) Today, you’ll find a charming mix of old and new throughout the neighborhood.

Southwest Portland is another top choice for apartment living, with it's stunning views of downtown, West Hills, the Willamette River, and Mount Hood. Meanwhile, Slabtown is a trendy area where residential and industrial buildings have replaced the lumber mills that provided slabs of log edges as fuel for laborers. Nestled between Portland’s Pearl District and Nob Hill and close to Forest Park, this neighborhood is becoming one of the most popular places to live in Portland for it's truly indie vibes.

Apartment living in Portland allows for community space that celebrates all the differences that define Portland life. Our communities offer the conveniences of city dwelling with all the comforts of home tied in. 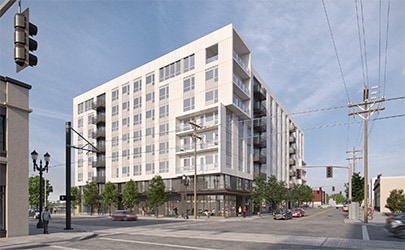